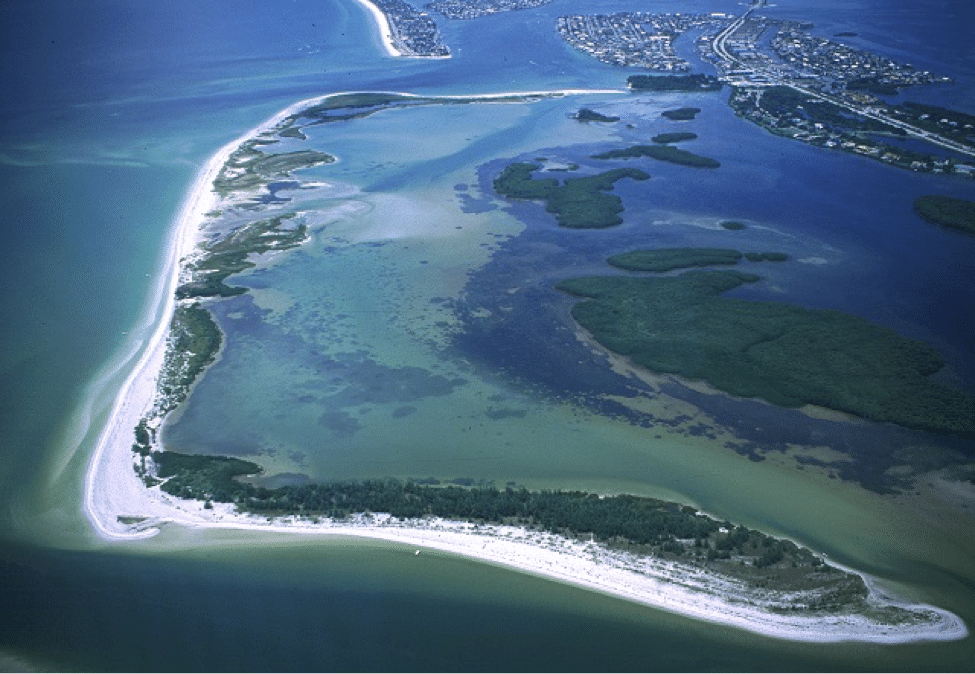 Shell Key Preserve was created in 2000 by Pinellas County. This area hosts a large diversity of birds such as cormorants, pelicans, osprey, and many other seabirds and is located between Pass-a-Grille beach and Fort DeSoto, and is a part of the Tierra Verde Community. The preserve encompasses an area larger than 1800 acres, including a 195 acre (2.5 mile long) barrier island, known as Shell Key. This area is only accessible by boat, which makes it an ideal place for many animals to live safely and nest.

On our tours, we make a stop at a location that locals refer to as Irma’s pass. Created in 2017 after hurricane Irma ripped along the Florida coast, this beach was a benefit of the hurricane’s destruction. Mangroves and seagrass were ripped from their beds, and sand was dragged out to sea, creating a beach nestled amongst the mangroves, and a boat channel for boaters to sneak through and out to the open Gulf.  While it offers a rest stop for boaters and wading birds, the environmental implications of the hurricane are apparent; a few dead trees have been reclaimed by locals and have been decorated with shells. The seagrass beds that hold sediment in place are a ways from the beach, which have lead to a steep drop off reaching down 35 feet at its deepest point.

This area plays an important role for local nesting birds. Sea birds like gulls, pelicans, osprey, cormorants, and many others nest in the area and raise their eggs to hatchlings. This area hosts a large diversity of fish, crustaceans, and other food sources to these birds. Cormorants can frequently be seen swimming alongside kayakers and spend time with us on tours. These birds feed on fish that live in the dense seagrass beds of Tampa Bay’s waters. As we paddle along, we play a role in the food web and stir these fish out of their habitat and allow the cormorants to feed. Pelicans, osprey, and skimmers can be seen flying over head and dipping into the water for food, or perched atop boating signs. Dolphins and manatees inhabit the area and can be seen splashing about looking for their next fish or seagrass meal.

Besides boating and birding, this area offers camping locations. It has been frequented by locals dating to the 1970’s and it’s exciting to continue the tradition of exploring and spending quality time immersed in the nature of the Shell Key Preserve. Fishermen and women frequent the area due to its high abundance of fish habitat. Commonly caught fish include mangrove snappers, sheepshead, snook, and many others. When it gets too hot on the beach, people can be seen snorkeling through the crystal water, and when it’s time to dry off shelling is a popular hobby for tourists.

If you or someone you know is looking to explore beautiful Shell Key Preserve on a kayak, book a tour with us. We’ll spend two and a half hours exploring the beautiful preserve, sightseeing, and interacting with the wildlife. Time will be spent at Irma’s pass to swim, collect shells, and wave at fellow kayakers and boaters

Why Weedon Island Preserve is the BEST Place to Go Kayaking