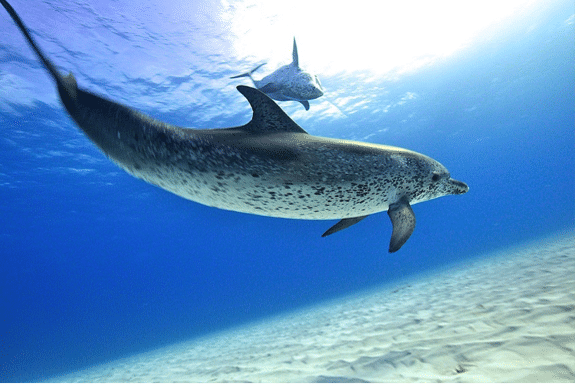 While there is a wide variety of wildlife to be seen when outdoors and kayaking in Tampa Bay, among the favorites of tourists and locals alike are Bottlenose dolphins. These mammals are frequently seen swimming, jumping, and hunting while on tours and never fail to make visitors smile.

What makes Tampa Bay’s population of dolphins unique is their charismatic nature and identifying markers. At about 8 feet long and grey in color, their back markings and different dorsal fins are how researchers tell local dolphin populations from more transient visitors. Some dolphins spend their entire lives in our local waters, while others just make Tampa Bay a pit-stop on their way towards other parts of the world. These resident animals have been studied since the 90’s by professors and students at the local Eckerd College. These animals have been studied through direct observations, photographs, and through underwater acoustic recording devices.

Dolphins live in groups called pods. Pods are composed primarily of females and juveniles with a few young males. These mammals swim at speeds exceeding 18 miles per hour, using their strong fluke, or tail. Dolphins are frequently seen jumping and playing in the shallow waters of the Shell Key Preserve.

Dolphins are unique in how they communicate with one another. They utilize echolocation through thousands of clicks per minute and also squeak to communicate. This echolocation helps track down and locate food sources, like bottom dwelling fish, invertebrates, and even squid. Echolocation is also used for swimming and playing, and is used by other dolphins for naming each other. Each animal has a unique name given to them by their pod, composed of different clicks and squeaks. Many dolphins will dive down to deep depths, with the deepest known dive reaching 990 feet down. These deeper depths host a variety of food for these animals, but since they are air-breathing mammals, they’re required to surface every few minutes for a fresh breath of air.

Shallow areas in Tampa Bay offer feeding grounds and opportunities to follow fishing boats for food scraps. However, this area also poses a number of challenges to these animals. Boaters who ignore regulations and posted speed limits hurt these animals as they speed past, causing lacerations and injuries to the backs of the animals. These marks, while helpful for identification, scar over and pose serious health risks while they heal. Further risks to dolphins include swimming with and feeding dolphins. Florida State Law prohibits these behaviors to protect these native animals.

On tours through Shell Key Preserve, we encourage guests to watch these beautiful animals at a distance. Our kayak tour saw two dolphins splash out of the water playing with each other a few weeks ago. We hope you’ll be lucky to see one on your own tour with us.