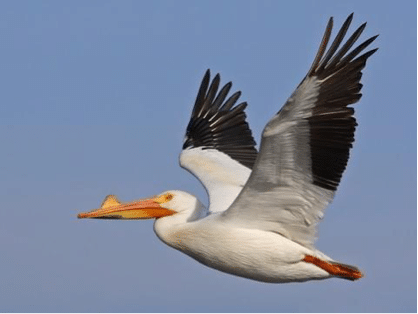 If you come on a tour with us, or spend some time here in Pinellas county during the winter, you will likely see large flocks of White Pelicans in the area. These large birds are following their annual migration route from Canada and utilize preserves and protected areas as rest stops on their long voyage south.

These birds are very similar to our native Brown Pelicans with just a few differences. With a height of 50-70 inches, and a beak ranging from 10 inches to 15 inches, these great white birds dwarf their smaller counterparts. Our native Brown Pelican is the smallest of 9 pelican species, while the White Pelican is of comparable size to the Australian and other global species. Their wingspan can even be as wide as three feet. Between their size and stark white color, these huge flocks of birds are noticeable in our local environments during winter months. These colonies of birds can be made up of hundreds of mating pairs at a time that congregate densely in shallow nearshore areas.

Other identifying features of these pelicans include a raised bump on their beaks that grow during mating seasons. These bumps attract females to males. Their white color is bright, and their wings feature black tips which can be seen as they soar through the sky

Breeding locations are located in the northern parts of North America, and their total habitat ranges from Canada down to central America where they spend their winters. Only two small locations in Mexico host these birds year-round. Their habitats are mostly near shore and fresh water locations like rivers and lakes. White pelicans only visit the coast during migrations, but mostly avoid open locations.

These birds live for about 16 years and work with their flocks to hunt and travel. These birds will group together to corral fish into a concentrated area for feeding. Stealing food is known as Kleptoparasitism, and White Pelicans occasionally engage in this behavior during hunting.

White Pelicans are predated by Red Foxes and Coyotes, but due to their dense populations located on offshore islands, they avoid predation by most mammals. When under threat by mammals, white pelicans occasionally abandon their nests. This does not occur when other avian species threaten these birds, they will stay and fight other birds.

Threats facing the White Pelican include habitat loss, predation by animals, nesting failure, and other anthropogenic harms such as boats, fishing gear and poaching. Due to the impacts of DDT and other pesticides used during the 20th century, the total population numbers of the White Pelican took a sharp decline that is slowly beginning to rise again back to stable levels. These animals are currently protected under the Migratory Bird Treaty Act of 1918, which protects these birds and about 800 other migratory species against hunting, capturing, poaching and other harmful actions.

You can do your part to help these birds by not disturbing resting colonies and maintaining safe distances. Proper disposal of fileted fish and fishing gear is critical to protecting their delicate beaks. Following posted speed limits and heeding local warnings is a team effort, and when we take care of these wintertime visitors, we encourage their natural migration patterns.

Different Types of Kayaking and Which is Best for You

Pet-Friendly Outdoor Adventure Activities to do with Your Dog