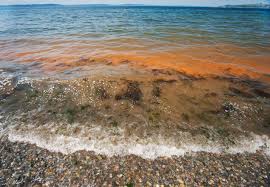 Most Floridians are all too familiar with Red Tide, the common name for a harmful dinoflagellate algae bloom that typically occurs during the summer months. Red Tide can have a disastrous effect on local ecosystems but is unfortunately all too common throughout the world. Karenia Brevis, the organism that is responsible for causing Red Tide in Florida and around the world is known to be harmful to a variety of life, both marine and terrestrial. It brings with it a cough and respiratory irritation for many Floridians and a disgusting smell.

While devastating, this tide is naturally occurring. Scientists refer to these events as Harmful Algal Blooms or HABs in shorthand. These tides occur when the level of K. Brevis is higher than normal, and this produces high levels of toxins in the water. This leads to associated issues like respiratory irritation to people living on or near the water, in addition to massive kills of local fish species. Red Tide is harmful due to the ripple effects that happen to local food chains, and the build-up of toxins in the bodies of larger predators such as birds and marine mammals.

The ripple effects that impact the economy of Florida also have harsh consequences. Shellfish become unsafe to eat during these HABs, beaches must close, and fishing is no longer an enjoyable hobby. Tourists are driven away from the fine sand beaches due to the health risks and potent smell, and the state loses millions of dollars in revenue garnered from tourism taxes.

But why is this issue so bad if it’s naturally occurring?

As the agriculture industry in Florida continues to grow and there is an increased emphasis placed on growing crops like tomatoes, citrus, mushrooms, and sod, pesticides increasingly make their way into the soil and local water bodies as a result of wastewater runoff. These high-nitrogen chemicals increase the growth rates of K. Brevis and kill off naturally occurring species of algae. The reduced competition to K. Brevis (Red Tide) eliminates nature’s system of checks and balances, leading to a rapid increase of certain species of algae and dinoflagellates to explode, while others dwindle in abundance.

Commercial agriculture increases soil nutrients such as phosphates, nitrogen, and other minerals to promote soil health and the growth of crop plants. These chemicals are the main ingredient in herbicides, pesticides, fertilizers, and other associated farming inputs. While this is great for rapidly producing food and increasing the production of farm profits, it leads to dangerous conditions when these nutrients make it off of the farm and out to the water. Higher than normal phosphorus levels in the water significantly increase the growth rates of blue-green algae and dinoflagellates.

Water health is a finely tuned balance of many different chemicals, and when this balance is thrown off, issues arise. This issue has been going on for so long with very few solutions because it is a type of pollution known as non-point source pollution. This means that this type of pollution comes from such a large number of many different sources, that it cannot be pinpointed to a single source. This is the hardest type of pollution to tackle for policymakers due to the wide variety of different stakeholders and environmental inputs at play. How do you choose between producing more crops to feed the families of America and the world, but damaging the ecosystem with fertilizer runoff? And reducing the output of crops, killing livelihoods and access to food, but saving the environment? These decisions are clearly challenging.

As high-nutrient water filled with chemicals from farm production runs off into nearby rivers, lakes, and streams the concentrations of chemicals and fertilizers increase in these water bodies. This runoff occurs when excess rain or water cannot be absorbed by soil and flows to lower elevations and collects in water bodies. In addition to carrying chemicals and pollutants, this also leads to soil erosion and creates a positive feedback loop in which runoff and erosion become increasingly worse issues. As most people have heard before, all rivers lead to the sea, and this results in chemicals, fertilizers, and other agricultural by-products to run into the marine environment. Agricultural pollution is currently one of the leading sources of coastal degradation.

With that being said, there are a number of ways to reduce the negative impacts of agriculture on coastal ecosystems. Wetlands are valuable areas, especially in Florida, and act similarly to the filter in your Brita. Wetland systems scrub pollutants from the water before it reaches the ocean, filtering out chemicals and particles that may be harmful to ocean ecosystems. Other natural filters like rivers, lakes, and streams remove pollutants as well. It is critical that they are well maintained and free of other pollutants to allow them to effectively operate as the world’s natural Brita.

As agriculture continues to prosper and expand in Florida, it becomes increasingly important to support environmentally focused policies and politicians. Individual consumers must support organic farms, and small-scale farmers to reduce their own environmentally damaging footprints. Voting for politicians and policies that will benefit local ecosystems is a must, or we will soon watch our beautiful beaches disappear under a sea of Red Tide. These small steps compound into large-scale action, and as people each work to combat these issues, larger-scale results will be achieved.

How to Choose the Best Kayak