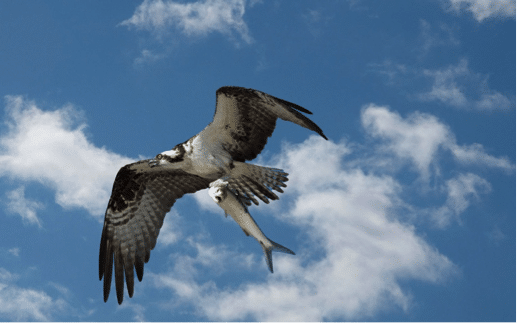 Shell Key Preserve is home to countless species of Florida’s sea birds, and is included in the list of Great Florida Birding trails. This area provides rest and shelter for migratory species on their way south for the winter, provides areas for mating and raising young, or just simply acts as a home for local species that live here year round. This area also provides beautiful views and amazing sights for those visitors or locals who are interested in birding

Common species of Florida sea birds are our beloved cormorants, ibises, osprey, and pelicans who can be seen fishing in the mangroves and along side our tours. Double Breasted Cormorants follow us on tours, swimming and diving alongside kayaks while looking for food. These black birds are close relatives of the Anhinga, and are told apart by their beak shape and habitat range; cormorants feature a hooked beak and live in costal habitats while anhinga’s utilize a straight, pointed beak and live in and near freshwater habitats. Both birds use their beaks to capture prey by piercing it. Neither of these species have a waterproof covering on their feathers, so they need to dry themselves out in the sunlight. This makes them easily identifiable as they stand atop boating signs or on branches with their wings outstretched.

White Ibises are referred to as “Florida Chickens” by locals and college students alike. These small Florida sea birds are either white in color with black tips on their wings and are often seen wandering through puddles and shorelines foraging for small fish, insects, or invertebrates to feed on. Their long, slender orange beak makes them easily identifiable, and their flocks tend to wander after rainstorms. These birds form colonies and live in mangroves and other coastal areas. Males protect the flocks from predators, and flocks of White Ibises frequently welcome in rogue speckled ibises. Though they are famous for their arched beak, theses birds actually hatch with straight beaks, which later bend after about 2 weeks out in the world.

Osprey have long been a threatened Florida sea bird species, but are slowly recovering their population sizes thanks to preserves and regulations that have been created and enforced throughout the United States. While these birds were once threatened by high levels of the pesticide DDT used in industrial agriculture, the ban implemented in the 1960’s paired with protected nesting habitats have ensured a slow, but steady increase. These birds are found near any body of water as fish are almost exclusively their sole source of food. They use their raptor feet and swoop over the water, snatching fish out, which they then bring home to nests. Their 70% fishing success rate is largely due to their outer toe, and barbed pads which work together to increase grip and traction on prey. They like to nest and perch in tall habitats and locations, so be sure to look up while kayaking, and you’re likely to see a few.

St. Petersburg’s friendly mascot is a personal favorite on tours. Despite their large size (ranging from 7 to 14lbs), these birds fly gracefully over the Florida shoreline in search of food and a place to float themselves in the ocean. The Brown Pelican is a common sight throughout much of south Florida, and the occasional White Pelican is spotted too. These birds feature large bills that expand as they feed and fill with water. These birds fish by diving into the water, lining their prey up with one open eye as they splash down, open mouthed. Unlike most other birds, Pelicans actually stand on their eggs to incubate them and population numbers are once again stable after eggshells were threatened by the impacts of pesticide poisoning.

If you’d like to learn more about Florida’s beautiful birds, book a tour with us and one of our knowledgeable guides will be more than happy to share information. Check out The Cornell Lab of Ornithology at All About Birds to learn some fun facts about our avian friends. Or if you want to learn more about those species that call St. Petersburg home, Audubon is a great resource.

Our fight to protect these vulnerable and beautiful animals is far from over. Although DDT has been banned, these birds are still sensitive to the use of other chemicals and pesticides on lawns and in agricultural centers. Pelicans and other sea birds are threatened by irresponsible fishing practices. Make sure to dispose of fishing line and filleted fish bones properly. When visiting our beaches, encourage your children (and yourself) not to chase or feed sea birds, no matter how fun it is. It is a team effort to protect these beautiful birds and their habitats, so we can each do our part to maintain the health of our local feathered friends.

Where to Find Dolphins in Tampa Bay